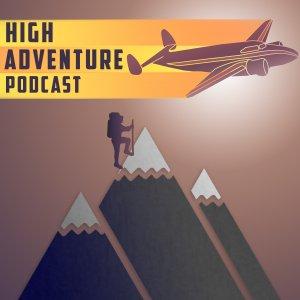 A Podcast of the High and Wild

In this episode of Mark Hummel’s Harmonica Party, Mark sits down with legendary drummer Wes Starr to talk about his career that started in Rome, Georgia and has taken him worldwide. Wes' resume includ

Mark talks about life on the road for blues musicians, and his book Big Road Blues: 12 Bars on I-80 and plays music from his new CD The Wayback Machine with Deep Basement Shakers - Contact Mark and check out his website -

In this episode we review Gilbert Gottfried's Amazing Colossal Podcast and Hello From The Magic Tavern and our Wildcard video picks: Adult Swim's Joe Pera Talks To You and the Netflix series Working Moms -

Glenn finds a mentor who he's sure will help him reach his potential as a criminal. He gets medical attention from a mob Doctor, robs another bank and goes back to Wenatchee and immediately starts a check forgery business.

Glenn meets a mentor in the Washington State Reformatory and finds that education and boxing might be his way out.  After release and having done time with adult criminals, Glenn's skillset has broadened.  Stealing a gun, robbing a cafe, a bank,

Glenn is sent to the Washington State Training School where he's beaten by both inmates and guards. After escape, he continues to pursue a career in crime. Kidnapping, armed robbery, extortion, stealing horses and a Police car all add up to being sente...

Nathan Glenn William grew up like every other kid in the 1920's except his hero's were Americas enemies. Glenn began a life of serious crime at age 11 by 12 he was in a reformatory and at 23 sentenced to life in prison for being a habitual criminal.

Sam and Lennie go deep into the cave system in search of answers but the cave provide more questions than answers. Earthquakes, flash floods, collapsing exits, Jet Ski's and unreasonable  of people make this the worst place imaginable. -

Trip Reports can take many forms. Timelines of trips or short stories form the journey both fall into the TR category. In Volume 3 we go with Beryl Rawles who's lost in the wilderness and trying to find a warm dry place to spend the night.

Sam and Lennie travel to Mexico in search of Diablo Grande. In a small village they find Diego,  a Curandero and something far stranger than anything they could have imagined.  Raineer and Carlo try to find common ground and do in the form of Commerce ...

After Travis is killed, and at the insistence of Carlo, Sam hires a plane piloted by Lennie, a badass female pilot. Flying off a dirt runway behind the Gris Gris Lounge in a hail of bullets, Sam and Lennie fly into the darkness and into Mexico.

Climbing superstar Pete Whittaker's Trip Report of his free climb of El Capitan's Secret Passage rated 5.13d. - Get your digital copy of Everest Alone today for only $5.  5 hours of entertainment for the price of a cup of Coffee. Buy Now -

Samuel Candle is on a rope dropping into the darkness of a cave in the Mexican jungle. He's dropping into a finite place in the infinite darkness.   This is not a pleasure trip of unpleasurable obstacles, Sam is working.

Sean Warren is a UK based big wall climber.  Sean's Trip Report of his solo climb of Native Son combines details and the casual nature this big wall master's humble approach to challenging himself. - Get your digital copy of Everest Alone today for on...

We are writing and producing as fast as we can in our studio. Season 3 will have some surprises including a podcast within a podcast called Trip Reports.  We have also just launched and audiobook titled Everest Alone: Maurice Wilson's 1934 Journey to b...

Maurice Wilson is leaving the Rongbuk Monastery and heading for the slopes and the summit of Mount Everest.  Will he finally be able to fulfill his destiny, prove his critics wrong and be the first person the stand on the summit on the highest place on...

Maurice forms a plan to sneak into Nepal with the help of 3 trusted Sherpas.  Disguised as a Tibetan Priest, Maurice walks 300 miles by night to get to the base of Mt. Everest. - Ammon McNeely and Kait Barber make the second ascent of Wings of Steel,

Ultra distance runner Dave Chamberlain sits down with Tom Ristimaki who holds a PHD in Possibilities.  Tom and Dave discuss inspiration, and the motivation to do things that are hard. - Dave Chamberlain has run the length of Argentina,

Maurice navigates the Ever Wrest across the North Africa, the Middle East and into India. The British government attempts to stop him at every turn.  Maurice is forced too makes decisions that alter his plans and could end his life.

In this special episode we interview Anna Smith an internationally known mountaineer. Anna explains the attraction of mountaineering in remote regions and explains what it takes too mentally and physically take on the worlds biggest and hardest mountains.

Maurice takes off on his journey but crashes on day one of the trip. He's unhurt but is this a preview of things to come?

Maurice Wilson emerges after 30 days of fasting and weeks in there Black Forest. After a long night of celebrating and conversation with friends,  Maurice tells his horrified companions that he knows exactly what he needs to do to test his own faith an...

Maurice Wilson climbs out of the darkness to find his reason to live, and or die trying.

Maurice Wilson was from Yorkshire, England. He was a decorated but damaged WWI veteran.  In 1933 he became obsessed with Mount Everest and becoming the first man to stand upon its’ summit.  His plan seemed reasonable.

The situation at the lake and in the Valley is getting strange. Cocaine replaces weed as the drug of choice. The Feds decide to reclaim the lake area with a military style raid. Houses and cars purchased and companies started,

Who was named in the Black Book, and why did people who possessed it keep dying?

S1 E4: Look Over Both Shoulders

A Yosemite lake, a plane crash and 6000 lbs of marijuana. Welcome to the 1977 Yosemite Pot Plane Crash

S1 E3: The Search and Discovery

If no one reports a plane missing, is it really missing? The 1976-77 Winter was unusually dry in Yosemite.  Finding a plane crash site in the backcountry should have been easy.  Mrs. Glisky knew her husband was in trouble,

Flying over the Sierra Nevada Mountains has always been dangerous. Join us for a little history of flight and crashes in the park and how a Howard 500 aircraft with 3 tons of marijuana ended up submerged in Lower Merced Pass Lake.

In season 1 of High Adventure Podcast we will explore the reality, legend and myth of the 1977 Yosemite Pot Plane crash.  In 1977 a crashed plane carrying two pilots and 6000 pounds of Marijuana was found in a remote region of Yosemite National Park.

In season 1 of High Adventure Podcast we will explore the reality, legend and myth of the 1977 Yosemite Pot Plane crash.  In 1977 a crashed plane carrying two pilots and 6000 pounds of Marijuana was found in a remote region of Yosemite National Park.